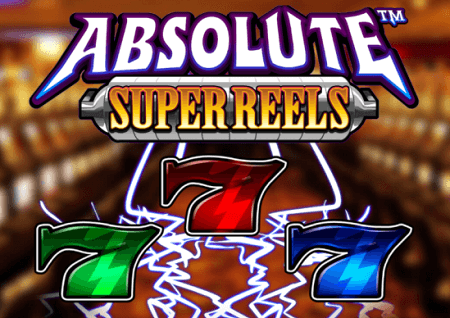 The casino gaming developer iSoftBet puts a great deal of effort into innovations in its slots titles, and the Absolute Super Reels slot is a prime example of this. In design and layout, it resembles nothing so much as an old-fashioned mechanical three-reel fruit machine, but the game play is packed with up-to-date extras and bonus features that make it well worthwhile to play.

At minimum stakes, Absolute Super Reels’ five fixed paylines can be played like a simple three-reel slot. However, players would do better to just choose the Max Bet button, which is 15 credits per line. If the budget is tight, the player can instead adjust the coin value per credit, which ranges from 1 to 50. So the player can play at Max Bet for just 75 cents per spin.

The main reason players should wager the maximum of 15 credits per payline in Absolute Super Reels is the activation of Reels 4 and 5. Reel 4 is the Instant Win reel, and it comes into play when the bet per line is between 10 and 15 credits.

However, Reel 5 is only engaged when the 15 credit maximum per line is being bet. As it can add multipliers to wins, along with free spins, this is the Reel that is most important to activate; hence the advice to always choose Max Bet.

Reel 1 to 3 in Absolute Super Reels use the classic three-reeler symbols: single, double and triple bars, and Lucky 7s in green, blue, gold and red, as well as tricolours. The prizes won by different combinations also vary according to whether the player is betting 1-9 credits or 10-15 credits per line. Any three bars and any three 7s, for example, win 3X and 15X the line bet, respectively, when playing at the lower stake, but 30X and 150X if played at the higher bet.

The top prize on the first three reels, for three Absolute Super Reels logos on one payline, is 4,000X the line bet; but it drops to just 400X if the player is playing fewer than 10 credits per line. There are also three different 7s with maximum prizes above 1,000X the line bet, as long as the player is betting 10-15 credits. So the wisdom of playing Max Bet is proven again by the pay table.

The Function of Reels 4 and 5

When the Instant Win reel is engaged, Reel 4 joins in the Absolute Super Reels spins along with Reels 1-3. It has no ordinary symbols on it, however. Instead, the Instant Win reel contains a series of numbers at random: +50, +150, +750 and +1,000. If any of these numbers come to rest at the end of a winning three-reel payline, the relevant number of credits is added to the win.

Reel 5 contains a series of multipliers: X2, X5 and X10, as well as the word Respin. If a multiplier symbol completes a winning line, the win is enhanced according to the multiplier value. If the respin symbol completes a winning line, the player receives up to 5 free respins, which can be retriggered. If three Absolute Super Reels logos, the +1,000 and X10 symbols all line up on one payline, the player wins the Absolute Super Reels progressive jackpot.